I’ve been putting aside these neat buildings for quite some time because I like them. Actually, years ago I got a bunch of Creglinger buildings and was amazed at the quality. I sold most of those becasue they are expensive, and started keeping Faller buildings.

From what I read online the Faller company started making buildings in 1946, and sold assembled buildings through 1959. The first use of plastics was for small detail parts like doors and windows in 1953. By 1960 the wood was gone.

I think most or maybe even all of my buildings are from the 1952-60 period.

Here’s my buildings in order by Faller catalog number. . .

Faller 103 Train Station. This is my biggest Faller building. This has plastic awnings, windows and doors along with the newstand on the train side. The balance is wood. It’s sitting on it’s original box. The 1954 catalog shows it just like this.

Faller 138 Waiting Platform. I found this in the 1955 catalog. It’s all wood but for the green benches. A neat detail item that is easily overlooked on the layout. This is shown below in the photo of the 233 Windmill.

Here’s a neat Faller Freight station. This has no plastic details on it. Someone added a hole for a screw on the deck area which I’ll cover with a small box or barrel. You can put this next to a siding.

Faller 219 Hotel Cafe. This is wood with plastic windows, shutters, doors, fence and round roof.

Faller 236 Church. This is wood with plastic roofs and doors. Faller made many different churches so all denominations could be represented. This was one of the cheapest churches.

Faller 261 Ranch house with carport. Mostly plastic construction but for base and roof.

Faller 269 House with deck. This is wood with plastic details. Shown in the 1955 catalog. This house makes no sense. There is only one door on the first floor. The rear of this house is shown with the 236 church.

Faller 281 Small Chalet with brown roof and wood sides. The fence, shutters, and trellis are brown plastic. The rest is wood.

Faller 287 Chalet with grey roof and timbered upper story with front balcony. I think they call this look “Half-timbered.” This has no plastic parts.

This is a neat building. It’s designed to be placed on a mountan slope. This version has no plastic. The balcony railing looks to be bakalite or another early insulating material repurposed. This is one of my favorites.

Unknown Barn like house. Wood construction but for doors, windows and chimney. No label and has different kind of wooden base and lights so might not be a Faller building?

Unknown House or Chalet with brown roof. This is all wood and is different enough from the Faller buildings that it might be from another maker. This is shown beside the 236 church above.

Creglingen Small Newstand. This is all wood and paper. Base says “August Flor Creglingen.” based on the ebay selling prices these are very desirable buildings. At one time I had a bunch of these and sold them. I regretted selling them, so I started keeping some of the interesting Faller buildings I found. The Faller Buildings are much cheaper.

Faller trees with metal bases. Catalog numbers for these are in the 350-395 range. Most of mine have prices written on the bottom so they don’t seem to be from sets. I found these in the 1955 catalog.

Here’s some other tress. These might be early Faller trees or maybe they are Creglingen,Vau Pe or another postwar german maker.

If you’re going to a train meet or selling some trains on eBay handing out some flyers will help get more forum members.

The forum is designed to alloow toy train collectors to share information about their trains. Some trading of toy trains and parts has also occured.

Flyers are four on a regular sheet of paper. When you’re at a show give them to people you’d like to see on the forum.

The flyer is a PDF. You can open it by clicking on it, and then selecting save. Or you can right click on the link below and select save as.

Thanks for helping the forum grow.

END_OF_DOCUMENT_TOKEN_TO_BE_REPLACED

The 815 tank car was introduced in 1926 and was cataloged through 1942. Supposedly the first cars were pea green with maroon frames, but the car I had was a later car from about 1932/33. In 1927 the frame color changed to black and continued to be black for the rest of the cars run.

Until 1934, the car was pea green. In 1934, the color was changed to aluminum. Cars with brass trim and latch couplers can be found with or without the Sunoco decal. Cars with box couplers, made in 1936 and after, always have decals.

END_OF_DOCUMENT_TOKEN_TO_BE_REPLACED

Lionel introduced the 800 series cars in 1926. These were the top of the line freight cars until the scale and semiscale cars were introduced in 1940. The first series of cars have brass plates and trim, and latch couplers.

In 1934 Lionel began converting the trim to nickel and changing the colors of the cars. Between 1934 and 1936 these cars came with a mixture of brass and nickel trim. These mixed trim or notch cars (because they fit in the notch years 1935 and 1935) can be a lot of fun to collect. Because most of these notch cars can be created by changing parts with other cars, collectors should examine the car for evidence of being taken apart before paying a premium for a notch car.

END_OF_DOCUMENT_TOKEN_TO_BE_REPLACED

The 607 passenger car and the matching 608 observation were introduced in 1926 and cataloged through 1937.

The 603 and 604 were introduced in 1931 and cataloged through 1936. The 603, 604 use the same bodies, but do not have lights. Earlier cars have two air tanks on the bottom. The earliest air tanks have brass end caps- found only on peacock cars- otherwise the end caps are nickel. Cars made after about 1935 have a single fishbelly on the bottom. Uncataloged cars have no air tanks or fishbellies.

END_OF_DOCUMENT_TOKEN_TO_BE_REPLACED

This is an interesting toy train layout. I have no idea who the owner was. Based on the trains in the pictures the trains were between 1916 and 1918. There are three pictures of the layout set up one way and one picture of the layout in another configuration.

What Makes This Layout Interesting?

Here is some young man with two of them. He also has two Lionel 700 series locos. The engine in the top photo is probably a Lionel 706 from 1916. (When enlarged the loco seems to have a reverse handle on it. Added 2020 – when I wrote this article I didn’t have the earliest version of the 154. The 154 from 1917 is much commoner than the 706, and would look the same in these poor pictures. )

In the picture below you can see both of the dark green boxcars and a 706/154 loco. The other cars are IVES cars. Note the interesting stockyard.

In the photo below you can see a wonderful top of the line IVES 1125 steamer pulling a bunch of lithographed cars. The tunnel in the background may be an early version of the Lionel 118 tunnel, but is probably a German import. 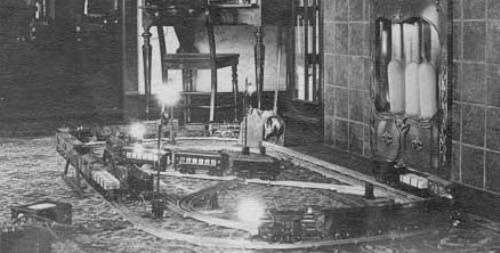 Below is a picture of the trains set up in a different layout.

Just looking at these old pictures, you can tell the family was well off. There is about $60 dollars worth of Lionel Trains on the layout. That’s in 1916 prices. The IVES trains and the accessories would bring the total spent by the family to put together this setup to over a hundred dollars.

Back then a hundred dollars was a lot of money. The average income for an industrial worker was less than $5.00 per day. Other workers made less.

I bet the family really enjoyed their trains.

Randy Efros has been collecting Marx trains since he was a boy in the 1950’s. His layouts are built with the idea of recreating a child’s layout from the fifties. I think he has accomplished his goal. Randy is an artist, and has painted his scenery with a child like touch. Many of the wood buildings were built from scrap wood by his father when Randy was a child. You can also see most of the Marx accessories in the pictures.

Randy has two layouts. A small 4 by 6 foot layout in his family room, and a larger bedroom layout. Here’s two pictures of the small layout: 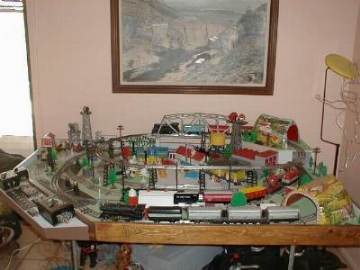 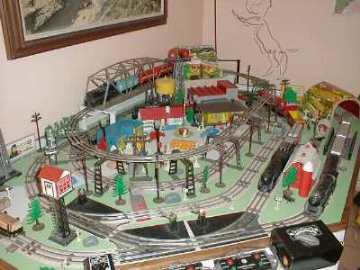 Here’s some pictures of the bedroom layout. To me this is what train layouts are all about. Plenty of items jammed into a small space just like a child would do if he had some wealthy aunts and uncles. 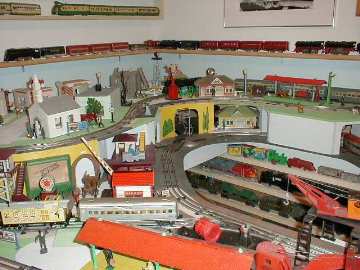 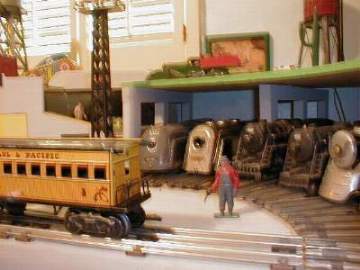 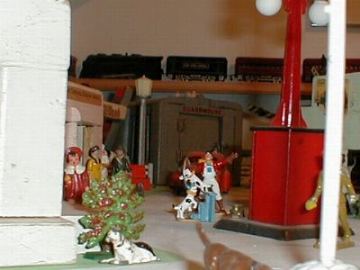 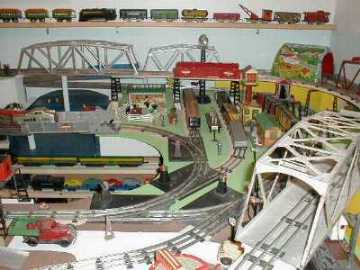 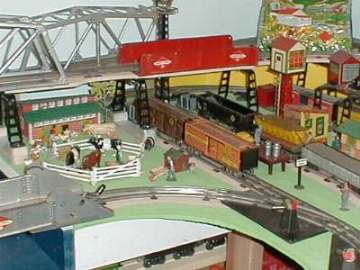 Here are some pictures of the bedroom layout I built in the mid 1990s. The room size is 10′ by 11′. I wanted to be able to show off my accessories in the way they were made to be shown- on a layout.

The standard gauge layout is constructed of 2X3’s and 5/16″ plywood. There is green carpeting-more like thick felt- on top. The O gauge layout is made of 1X2’s and plywood.

The Standard gauge layout runs all the way around the room with a raising bridge at the door. It will hold four trains, and run two trains at the same time. The bridge is made from a 1X12″ and is hinged to allow easy access. The hinge pins must be higher than the top of the track. Access to the closet is by ducking under the layout.

The O gauge layout was constructed to show off the 916 tunnel. One train will run around the layout and there is a short length of track for storing another train- The 253 passenger set is sitting on it.

There are better pictures are below these darker scans.

This shows the transition to the bridge. My work desk is under the shelf. The shelf is a 1X12″ and two standard gauge trains will run across it without hitting.

This shows the duck under to the closet.

These two photos show the south side of the layout. Because of space considerations the Standard gauge layout is only 40″ wide here. There’s enough room for 3 passing sidings on the inside loop. The PVC pipes support the O gauge layout, and contain the wires for the upper layout.

As you can see, it is possible to build a big layout in a small space.

Here’s one last picture of the layout:

This Picture shows the hinged bridge, and the world’s stupidest rabbit.

This layout was taken down just after these pictures were originally posted. The rabbit lived for another 8 years.

The pictures above were taken with a camera and then scanned.

Here’s photos taken just before the layout was taken down with a digital camera:

Lionel 155 Freight sheds with freight waiting for pick up.

Jockeys out for the morning run