END_OF_DOCUMENT_TOKEN_TO_BE_REPLACED

The 815 tank car was introduced in 1926 and was cataloged through 1942. Supposedly the first cars were pea green with maroon frames, but the car I had was a later car from about 1932/33. In 1927 the frame color changed to black and continued to be black for the rest of the cars run.

Until 1934, the car was pea green. In 1934, the color was changed to aluminum. Cars with brass trim and latch couplers can be found with or without the Sunoco decal. Cars with box couplers, made in 1936 and after, always have decals.

END_OF_DOCUMENT_TOKEN_TO_BE_REPLACED

Lionel introduced the 800 series cars in 1926. These were the top of the line freight cars until the scale and semiscale cars were introduced in 1940. The first series of cars have brass plates and trim, and latch couplers.

In 1934 Lionel began converting the trim to nickel and changing the colors of the cars. Between 1934 and 1936 these cars came with a mixture of brass and nickel trim. These mixed trim or notch cars (because they fit in the notch years 1935 and 1935) can be a lot of fun to collect. Because most of these notch cars can be created by changing parts with other cars, collectors should examine the car for evidence of being taken apart before paying a premium for a notch car.

END_OF_DOCUMENT_TOKEN_TO_BE_REPLACED

The 607 passenger car and the matching 608 observation were introduced in 1926 and cataloged through 1937.

The 603 and 604 were introduced in 1931 and cataloged through 1936. The 603, 604 use the same bodies, but do not have lights. Earlier cars have two air tanks on the bottom. The earliest air tanks have brass end caps- found only on peacock cars- otherwise the end caps are nickel. Cars made after about 1935 have a single fishbelly on the bottom. Uncataloged cars have no air tanks or fishbellies.

END_OF_DOCUMENT_TOKEN_TO_BE_REPLACED 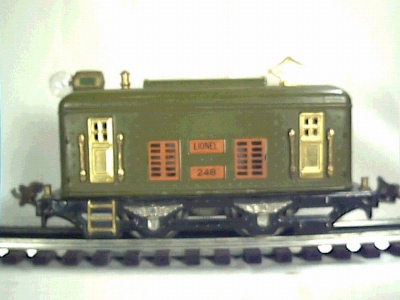 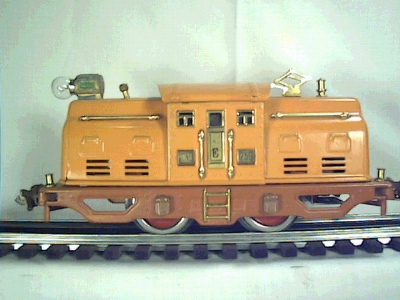