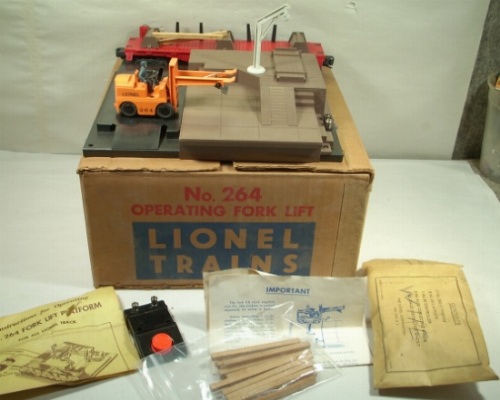 Lionel made the 264 forklift set from 1957-60. Everything included with the set is shown above except the box inserts.

This is a neat accessory. the forklift grabs a single wood beam from the 6264 flatcar, and backs away from the car. It then pivots to the side and drops the beam. It does this until one side of the car is unloaded. Then you have to move the train a few inches to allow the forklift to unload the other side of the car.

The Lionel 6264 flatcar with lumber is packed in the box without it’s own box. The 6264 box is worth 4-5 times as much as the flatcar itself. 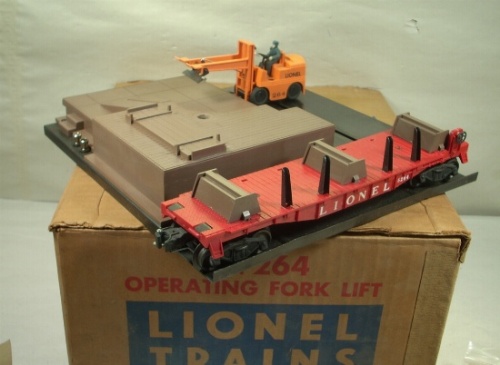 There are no variations of the flatcar or forklift set. 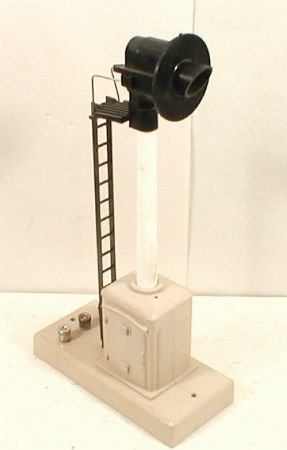 It has a single light showing. Compare this to the Lionel 253.

There are no variations of the 163 signal.

Note it would be easy to exchange the light hoods on a 353 and 163 signals to get base variations. The 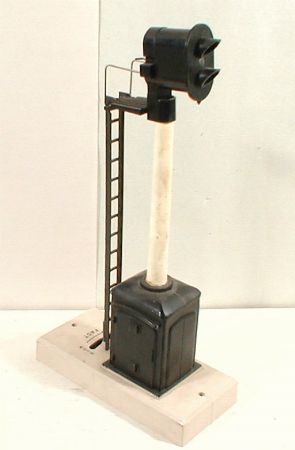 Lionel introduced the 253 block signal in 1956. The all plastic signal replaced the earlier metal 153 signal.

The 253 has a stop mechanism in it. The train approaches a red signal and stops. A timer in the base of the signal hold the train. When the time is up, the signal turns green and the train goes on it’s way.

The same signal WITHOUT the stop mechanism is a 353. A similar signal was made with ONE lamp showing called a 163. The 163 has two bulbs, but a different head. Here’s a page showing the Lionel 163 Signal.

Lionel intorduced the 2461 transformer flatcar in 1947. The gray base is diecast metal, and the transformer is plastic. The first cars were made with red transformers. Later production runs had black transformers. Red is harder to find and more desirable.

The insulators on top of the transformer are usually broken. On the car above the two on the right are broken off.

Lionel made 2 variations of the 2460 crane- black cab as shown above and gray cabs. Gray is worth more.

The black cranes are still quite popular and are very common.

In 1951, Lionel replaced the six wheel trucks with regular four wheel trucks and renumbered the crane as the 6460.

There are no variations of this car. It’s all metal and a good looking car, so still has some desirability to operators.

Note: The ends of the 2758 and 2458 boxcar are diecast metal. This metal sometimes degrades. So when considering one for purchase make sure the ends are sound. These cars are common enough that there is no reason to buy one in poor condition.

The 2452 gondola was Lionel’s first plastic bodied train. The 2954 semi scale boxcar and the Madison cars introduced in 1940 were made of Bakalite. Bakalite is molded from granulated material. The material is compressed and heated to form the car.

The 2452 is made of a dense styrene plastic. Styrene is molded by forcing liquid material into a mold.

Anyway, the 2452 gondola comes in two basic versions. The O gauge 2452 has brakewheels and came with wooden barrels. The 0-27 gauge 2452X has no brakewheels, and didn’t come with barrels.

There are a lot of different versions of this car having to do with the mold – earliest bodies have three round holes in the floor, while later bodies have a large rectangular hole. The holes are for the electronic receiver used on the 4452 gondola.

There is also a lettering variation. The G27 is either small or large. Large is later. None of the variations mentioned above effect the value of the car.

There is another variation that does effect the value. The trucks. The 1945 cars come with flying shoe trucks. The pick up for the uncoupler is open. Later cars have a metal plate under the entire truck to provide support for the shoe.

Flying shoe trucks double the value of this car. A 2452 with whirley wheels can bring 4 times the value of a standard gondola.

Lionel introduced the 2411 flat car in 1946 as the “Big Inch Pipe Car.” It came with 3 blackened steel pipes. These pipes are hard to find today and are worth more than the flatcar.

The 2411 flatcar is very common. It’s all metal and looks great with any train. In 1949 the trucks were changed to the new magnetic type and the 2411 was renumbered to the 6411.

As a side note, the difference between a GP-7 and a GP-9 is the addition of a dynamic brake to the top of the cab.

Both versions are equally available today and neither commands a premium.

I think the orange cab versions come in boxes marked 2338X. The orange cab is worth considerably more than the black cab.