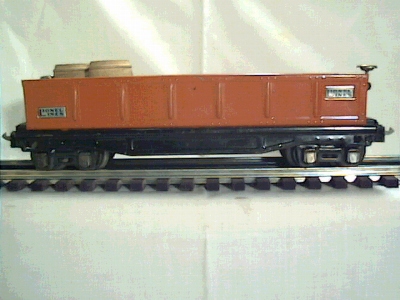 The orange car with nickel plates is the rarest gondola. The green one is the most common. The 2812X is easier to find than the normal 2812 but because a 2812X can be converted to a 2812 by changing the trucks, collectors will not pay extra for the car.

The 812 gondola was introduced by Lionel in 1926, and was cataloged through 1942. It came in the following colors:

Here’s pictures of the different cars:

For a photo of the light green with nickel plates and the flat orange cars see the 2812 gondolas.

Below is a photo showing the loads Lionel provided with the 812 and 2812 gondolas. The cars always came with barrels. Early barrels were wine shaped as shown on the left, later barrels were oil shaped as
shown on the right. Gondolas sold in work train sets with the 810 or 2810 crane also came with the tools shown. Tools were also sold separately as the 812T.

In 1938 Lionel added automatic couplers to the 810 Crane to get the 2810 crane. The crane only has an automatic coupler on one end because the knob that turns the cab would interfere with the automatic mechanism. The 2810 only came in yellow with a red roof.

Two versions were produced – the early version with flat frame, and the more desirable dished frame version. The crane received the dished frame in 1940. Also in 1940, the hook was changed to a die cast hook, (Note: prewar hooks are perpendicular to the string while postwar hooks are parallel to the string.) and the knobs changed from turned to cast knobs. This car was never produced with rubber stamped lettering.

The 1934 810 crane with mixed trim is the hardest to find but the Lionel 2810 crane with operating couplers and dished frame is the most sought after.

The 3859 dump was introduced by Lionel in 1939 and ran through 1942. The car was always red with a black frame. This car dumps its load of simulated coal at the push of a button, and is a perfect complement for Lionel’s 97 coal loader.

The only variation is the type of frame and couplers. This car came with either the type 3 frame and automatic box couplers or the type 4 dished frame with solenoid actuated simulated knuckle couplers. Neither variation is difficult to find, but the later car runs better.

The 2820 Floodlight car was cataloged by Lionel from 1938-42. The first version had nickel plated lights, and the second version had gray painted die cast lights. The cast light version is much harder to find. The searchlight car with cast lights has a dished frame.

The 2820 is the same as the Lionel 820 Floodlight car but has automatic couplers. The switch on the top allows the user to turn the lights on or off.

The 3811 comes with either a flat frame or a dished frame and was cataloged by Lionel from 1939 to 1942. Both versions are quite common, but the dish framed log car runs better.

The 2811 Flat car was introduced by Lionel in 1938 and cataloged until 1942. It’s the same as the 811 flatcar, but has automatic couplers. It was only made in aluminum with black lettering, and was never included in sets.

The 2811 and 811 while shown in the catalogs in 1940 – 42 probably weren’t made because dished frame versions haven’t been found. The 3811 automatic log car was made in both frame types.

The 820 searchlight car was introduced by Lionel in 1931 and was cataloged through 1942. The earliest cars came with terra cotta platforms and brass lights. In 1934 the color changed to 45N green with nickel lights. The 1934 45N green is darker than the later 45N or accessory green. The darker 1934 color is shown below. All searchlight cars after 1934 have 45N green platforms. In 1940 the floodlights changed to gray painted die cast and the frame was changed to a dish frame to accommodate the newer style of trucks.

The Lionel 820 with die cast floodlights is almost impossible to find. The version with the darker accessory green platform and latch couplers is the next hardest to find. All other versions are quite common.

The 811 flat car was introduced in 1926 and cataloged through 1940. The 811 was made in maroon with gold lettering and in aluminum with black lettering.

The maroon cars have brass or nickel (harder to find) stakes. The aluminum cars have nickel trim and can have either latch or box couplers. Until 1934 the flatcar came with a solid load of lumber; after 1934 the flat car came with 8 pieces of cut lumber.

The Lionel 2811 flatcar is the same car with remote control couplers.